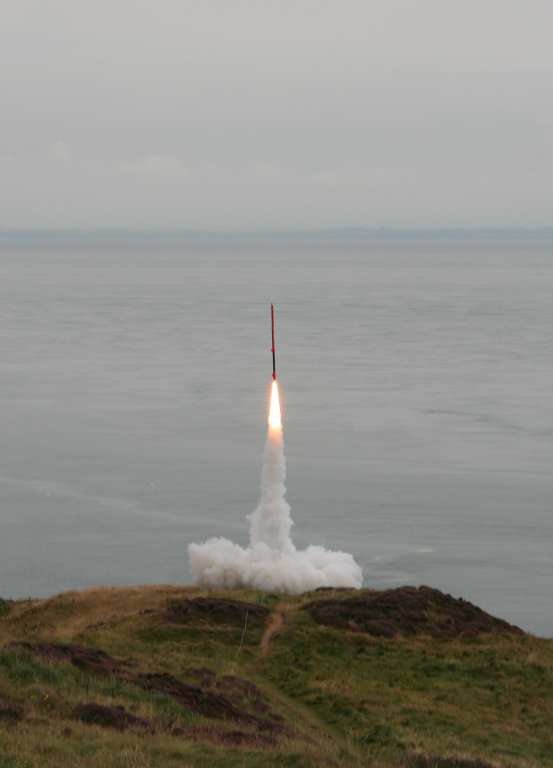 Black Streak is a project managed under the auspices of the Bolton Science and Technology Centre (BSTC). With this project we have created a reusable rocket for launching high school science projects. The first phase, which was funded by a one off grant from the NWDA,vwas to create the vehicle, establish the legal and administrative framework required for the launch site, and then carry out the first launch. Black Streak was launched successfully on the 1st of September 2011 and we are now seeking further funding to establish a national competition for payload design across all UK high schools. 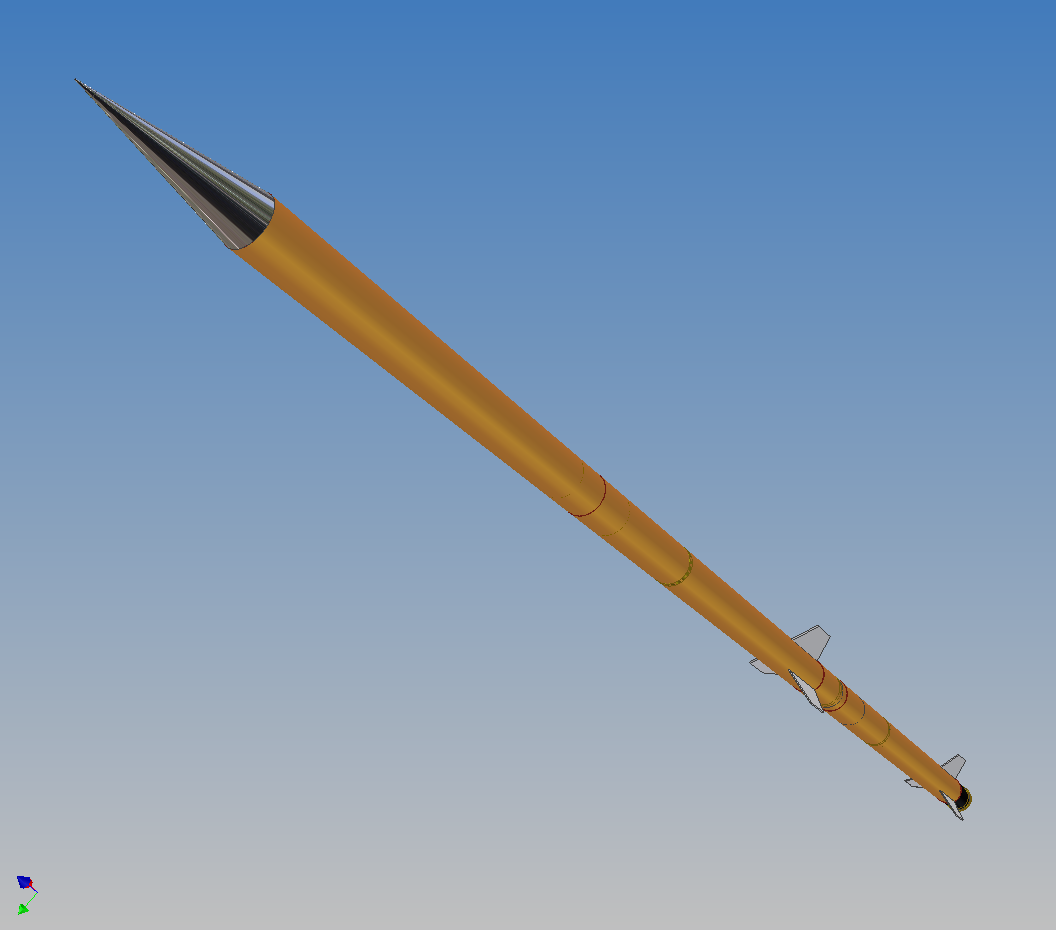 The rocket itself is based upon the largest rocket motors conveniently available in the UK, Aerotech N2000W composite propellant motors. Two of these will be employed in a classical inline two stage vehicle of minimum diameter. Given this propulsion, simulations suggest it will be able to carry a number of significant school payloads to approximately 18km, or 60,000 feet. This is nearly twice the typical height that airliners fly, considerably higher than school developed rockets could be expected to achieve and, though only about 1/5th the way to space, will present interesting scientific opportunities as it is above the majority of the Earth's atmosphere.

The airframe has been produced by composite materials experts Composite Mast Engineering and Technology in Bacup and is of mixed Carbon fibre/Epoxy and Glass fibre/Epoxy construction. The Glass fibre section if for radio transparency as we will be using AED electronics R-DAS flight computer with live telemetry and GPS tracking. 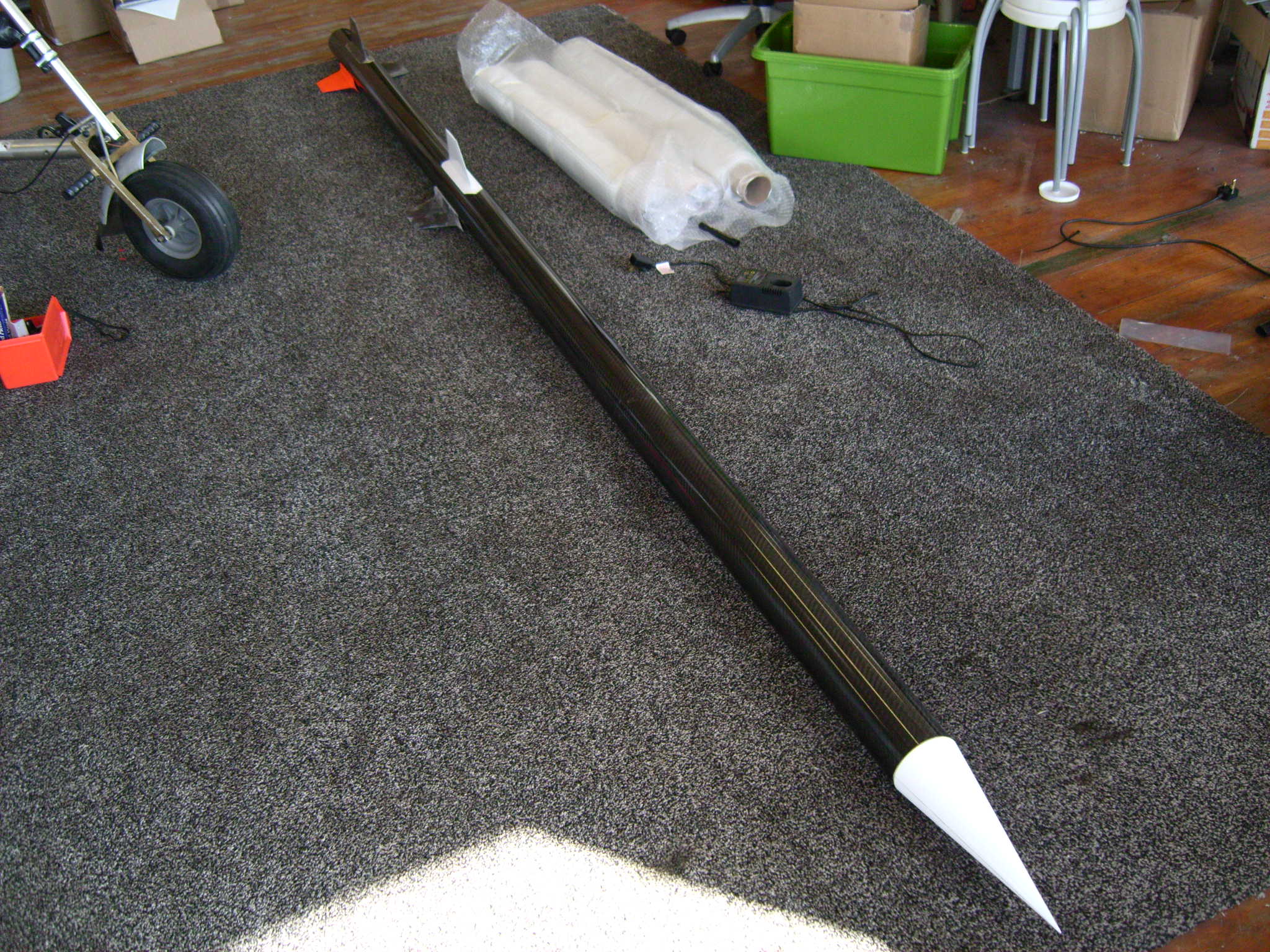 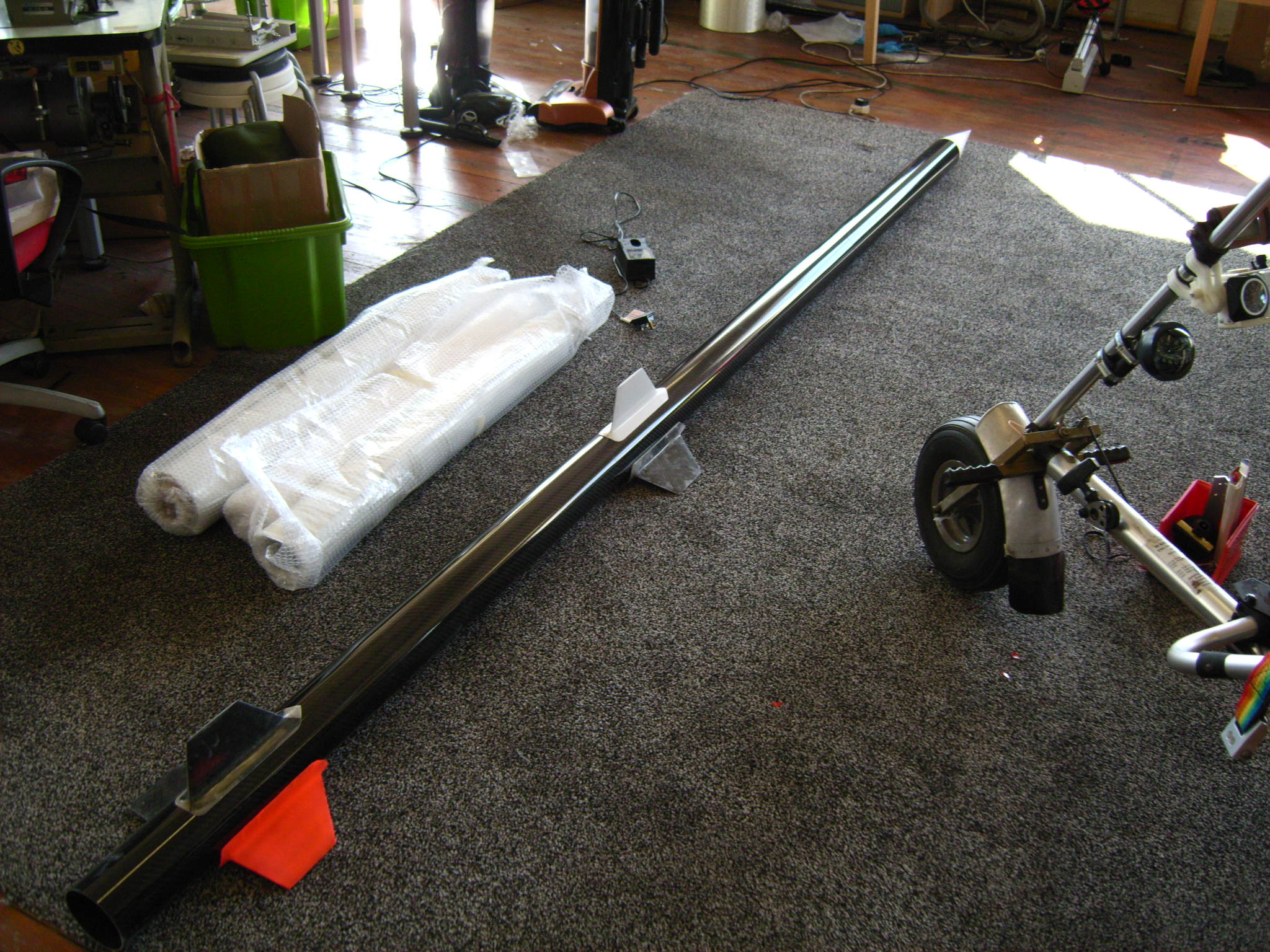 The launch pad is the most user friendly pad I have ever had the good fortune to use. It has been designed and constructed around our requirements by Glasgow engineering company Protronix and is also a lightweight and highly efficient design. Constructed from three identical aluminium modules it provides the necessary rigidity while remaining (just about) a one person lift when assembled. 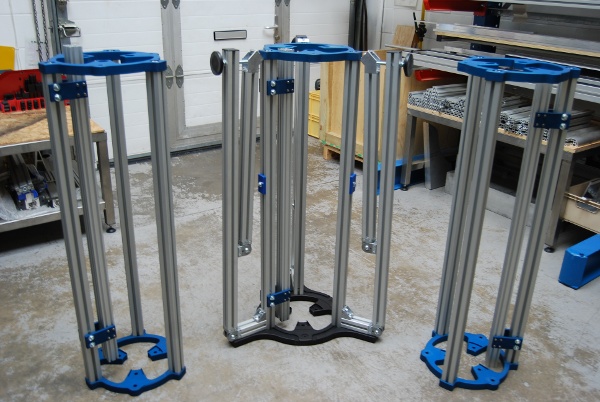 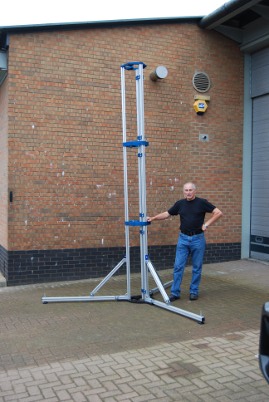 The payload on the first flight was a single large unit, constructed by a core team of students at the BSTC who have been involved with the rocket since it's inception. They have valiantly remained enthused as we have battled through the remaining obstacles to launch and have established a thriving electronic club at the centre in the mean time. The payload monitored the performance of the rocket, recorded on board video and measured the atmospheric conditions encountered by the rocket. 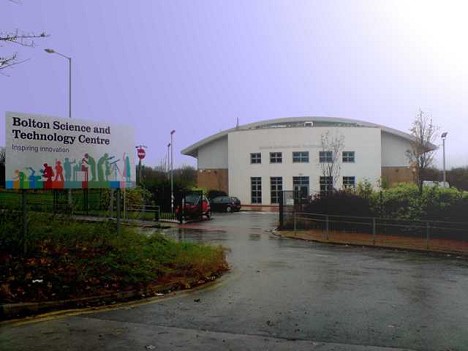 British rockets of the original UK government rocket programmeswere given rainbow code names as an extension of established weapons development practice. Though they were not supposed to indicate purpose, the UK's two biggest space research rockets, the sub-orbital Black Knight and the british satellite launch vehicle Black Arrow, were the only "Black" projects. As our vehicle is a British civilian research rocket and is physically black due to it's polished carbon fibre construction, it seemed appropriate that it should be Black something. Streak then refers to the UK's largest rocket, Blue Streak, of equivalent capability to the American Atlas rocket, it began as a missile programme before morphing into the foundation of the first joint european launch vehicle, Europa Though ultimately Europa failed Blue Streak performed almost totally flawlessly on every flight. Thus meet Black Streak!

I have been mission designer on the project, establishing the overall design and working with our supporting organisations on the detailed designs. I have also successfully secured all the necessary permissions for our chosen launch site and performed the safety analysis necessary for Civil Aviation Authority clearance. Finally I was launch coordinator on the day itself.

As part of the safety analysis I performed statistical scatter analysis of our nominal flight profile using the excellent Cambridge Rocketry Toolbox. This is an open source project and offers tremendous capabilities equivalent to, and in many cases better than, the leading commercial rocketry software. I used CRTB prior to its dedicated GUI as a command line utility within GNU Octave (or Matlab), but it is now available as a standalone program and features Black Streak as an example. 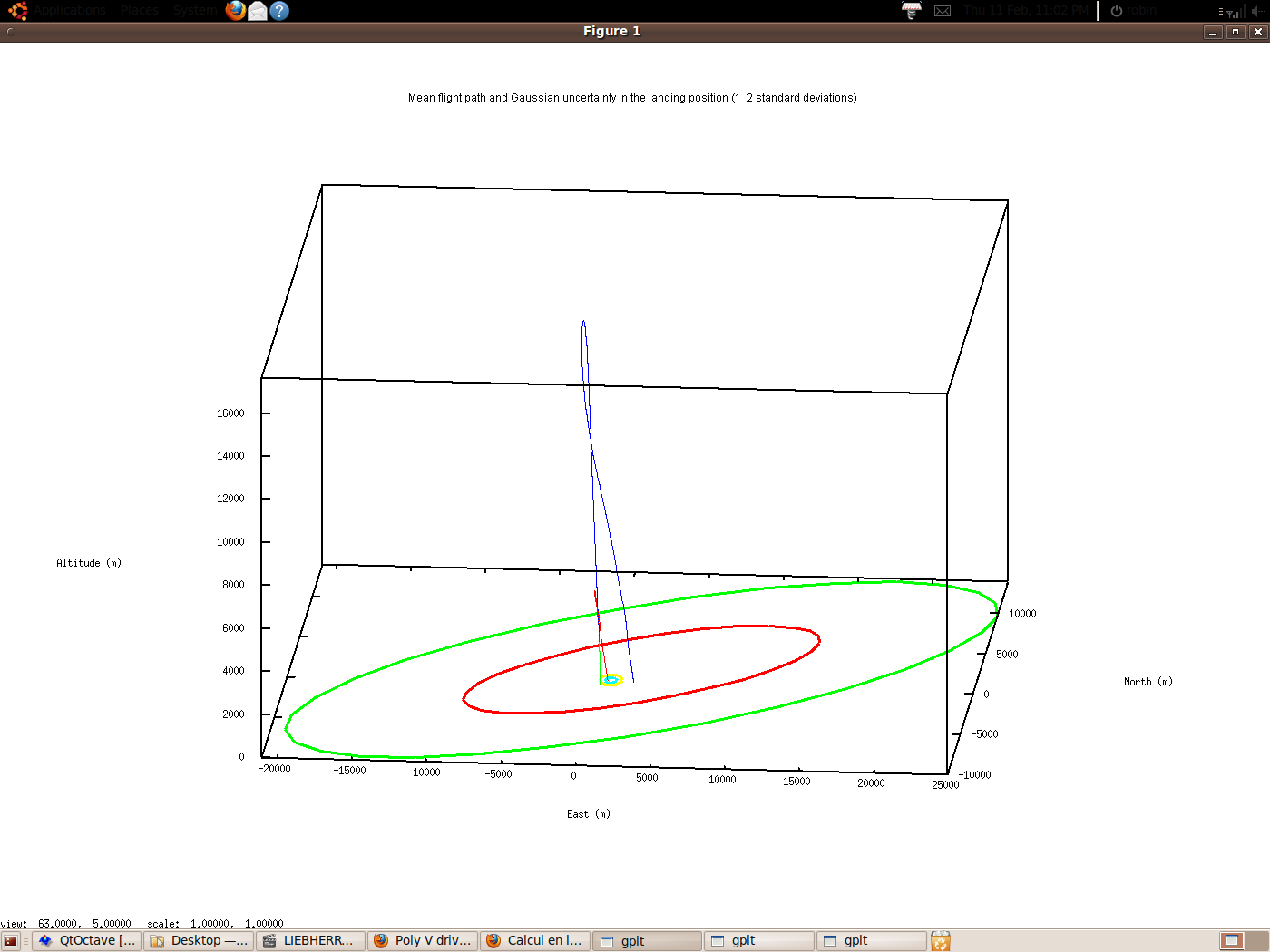 Longer term we intend that the proposed competition will grow along the lines of the Cansat projects, though of course tailored to take advantage of our flight profile. We hope it will provide a complementary avenue to established rocket design competitions like UKAYRoC and will run annually, culminating in a summer launch of ten winning payloads. I am confident that students across the country will propose avenues of experimentation we could never have envisaged.